A surprise gift from Gin! I put aside getting this kid since people told me it was exactly the same as the kid before it. That it was the same kid figure with just a slick new box to promote the new movie. Even though the box is pretty swanky I told myself I shouldn't get it just because the box is pretty. But its NOT the same figure! It may have the same mold but when you look closely he is a shimmery grey! He looks like he was coated with a sparkly paint. :D I'm so glad she gave this to me or I'd never know he was different! And the box is cool, yo. I'm keeping it.
Normal and Movie Kid side by side.

Yes, I need to get two of Emolga, one to represent both my sugar gliders, Jippo and Oswald. They are also named after my gliders in the games. Oswald is the shiny while Jippo is the normal. :D It was so much fun painting this one! He came out so smooth and bright. C:

Oh, such a cutie. No one can resist Emolga's charm. Literally. Look at that cute little heart on his cheek! Aaaaah and the wink. It doesn't even feel like an attack kid. Just normal classic Emolga. c: I hope he'll get another where he's using volt switch though. That would be amazing!

It took awhile but I finally had the time to paint a shiny variant of the attack kid. X3 It came out very well if I do say so myself.

EEEEE! Tomy figure! This is the first Tomy I've ever gotten that came with the new spin-y base. I really don't get why you need it other than to hold certain pokemon up. But hey, its red. I had to buy a second one since I liked this one in the box so much. 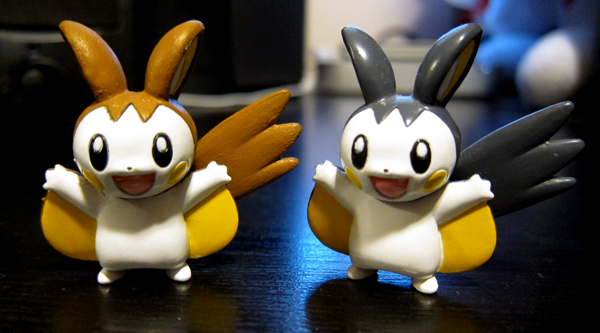 And while at the Nintendo Store I decided to pick up an couple extra Monga's for repainting! <3 Aaaah, his coats came out so smoothly! And I got the shade of brown I had for his kid figure, so they match!

Ah! Emolga soapy figure! After two years of searching. I really can't believe its been that long since it released. I thought I'd find it sooner but nope. SO worth the wait though. It's a lot bigger than the other soap figures I got and its in excellent condition. ;u; Amazing.

I always loved windup toys! I was stoked seeing emonga getting one. It took me awhile to get a hold of one after it was released though. It was in a set with Pikachu, Minccino and Oshawott. He sits at my desk at work.

This one is very cute. It's cheeks light up! nicely sculpt and the yellow base is cute. It took a bit to find but now I finally have it! 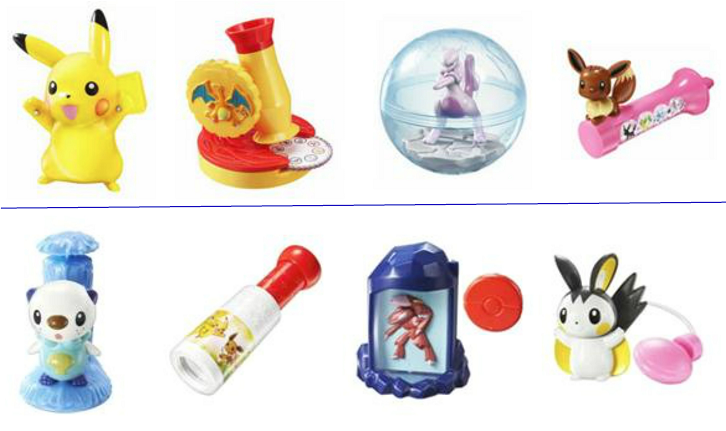 This figure!!! He's probably one of the biggest, nicest, well sculpted Emolga figure I own! And if you can believe it, its not from the Pokemon Center but....McDonalds!!! o_o This McDonalds figure is from Brazil's Pokemon toy promotion. Holy Crap! I love this thing!!!! He's absolutely perfect, it almost looks like a small statue. I had no idea what this big box could of been when I received it. Then this gargantuan thing pops out! Here he is with my shiny Slakoth kid. I still can't believe this is an McDonalds toy. Seriously. Thank you, McDonalds Brazil. <3

I recently got my bundle from SunyShore! Meaning new PitaPoke for meeeeeee!!! When I heard about this series I scrolled through all the figures anxiously looking for an Emolga. The first set I had no luck. Ooooooh! You gotta add Emolga! Then I waited and the second set of these came out. Which ended up being bigger playsets. I skimmed through the selection and saw him! With my favorite elemental monkey too! And cooking! Aaaaah~ I love this series and I hope they do more of my favorites. I caved and got the Whimsicott as well. I'd be willing to trade my Pansear for another Emolga if anyone wants to part with theres. :3

I was soooooo hoping Emonga would get a clipping figure! A lot of my favorites got one this set. It's so well made, I  always pictured it be in this exact pose XD It's so weird my idea of its clipping figure came to life. There's not too much you could do with Emonga though, haha. I wish he had an angry face. We need more angry monga merch!

This charm is very special, it was only available on bottles of Pepsi. They had about 30 Pokemon from this set, so I can only imagine how hard it was to find JUST an Emonga. I decided to get two one minty and one to display. I really love this one since they're bigger than the Pokecen charms and his eyes are wider and he has a smile rather than a :D face. ^^

My first chupa. EVER. HEEEEEEE. They are very small but very detailed. The mold of this figure is so unique to the others. He seems a little rounder and its nice to see him with a different expression. One where hes not doing this face. :D I'm terrible with these blind packages, they always syke  you out with the pokeballs. They'll put a Zekrom in a pokeball and a Pikachu in a Masterball, and being oblivious to the chupa series I didn't think of that concept. I just thought "Oh, they always put Emolga in a great ball. It must be in the great ball. And HOLY crap. He was in the great ball!  I love these things, they remind me of "Nestle's Wonderballs". The lolli was very yummy. :>

Here is the Pokedex keychain, its the exact same Emolga figure as the one that came with a greatball from another set by the same company. But the pokedex is what made me REEEEEALLY want this. Its an exact TINY replica of the female trainers pokedex! And it even has a tiny picture/info for emolga on the screen! AAAAAAAAAAAAAAH! SO COOL.

Yeah yeah yeah yeah! Emolga finally gotten some of these charms! I have soooo many of these for other pokemon but was waiting patiently to see Emolga get one. I love the knotted string and the pose for this one is really quite nice. He looks a little longer and skinnier.