In 2015, Pokemon Centers in Japan had a lottery based off the new "Battle Trozei" series. It was never for sale in the Pokemon Center, toy stores, or anywhere else.  If you spent 3500 yen (about $32), you got one chance in a bingo-type lottery. This was the 1ST PLACE prize in the lottery.  Only given out for a very limited time and in very limited quantity. It was Extremely difficult to win. If customers did win this they kept it for themselves because I have NEVER seen this suitcase for sale any where else besides my own.  I can't believe I own this! I've only ever seen one other up for auction! The person who sold this to me said that their Pokemon Center only had ONE of these available to win in the whole store. That really shows me how big the odds were to win this. It's bigger than I thought it was. As big as a over head carry on bag. I'll probably won't use this on any trips though as I know the airport would destroy it, The inside is pretty roomy. :D I got this all for that little Sylveon square. <3

I don't collect Fennekin but dang Sylveon why must you be so big on this tin!? Are you and Fennekin best buds or what? You seem to be on all of Fennekins merch. This one is really fun since you get a little figure on top and the scene of Pokemon is really colorful and fun. I hope in the future Sylveon gets one.

Another stackable cookie tin! This time in Kuttari style! Sylveon is featured on the bottom tin. 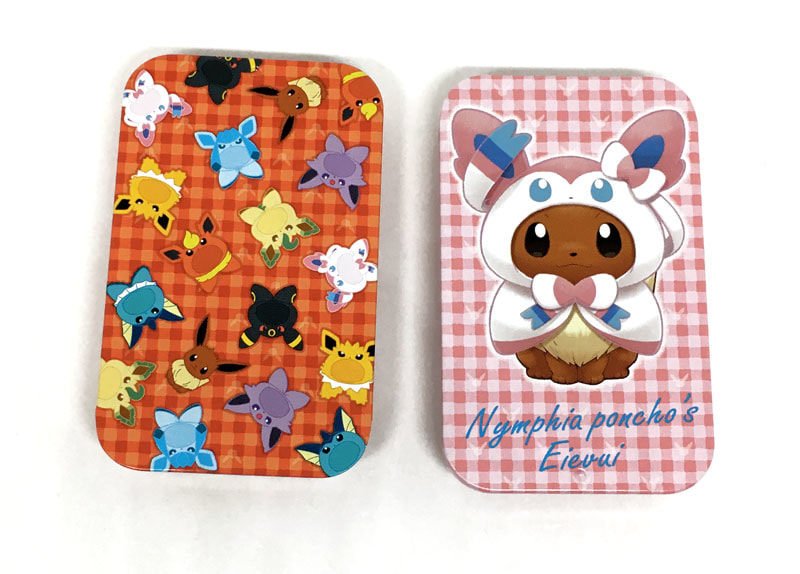 The packaging for this product is super cute! It looks just like a shuffle piece! Adorable. The packaging has three Sylveon heads on it. These are masking tapes shaped like Pokemon heads in the pokemon trozei style. I cannot get enough of this Sylveon design. These are pretty big in comparison to my other tapes. They're a wee bit bigger than an average kid figure for size comparison. The head part of it makes it easier to display and see. Only the Sylveon and Eevee tapes have the Eeveelution pattern.

So happy I didn't have to buy the whole game to get this. ;3; An adorable plastic dominio piece.

Here's a new Japanese Happy meal toy featuring Serena and her Pokemon. It's pokeball shape and you have to get all the balls through certain holes to win.

Another amazing find while visiting Japan! Ah! Both my XY lovelies are featured on the front.

2015 Sylveon and Friends Fold Up Fan 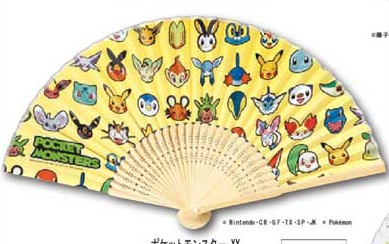 This was only obtainable at a special tournament in Japan called "Battle Festa" in October 2014. You receive points during the tournament which would allow you to get special promotion items from the event. I think these were given out when you enter. Look at this new artwork!!! Additionally, at the temporary Pokemon Center at the event, there were exclusive items available in limited supply. Including pins and of course this!!! It's a foldable sliding deck box for your cards but the art is soooo good I had to get it. It features so many Pokemon I love!

How refreshing! A new Sylveon item! And a random one at that! I'm not complaining though since Sylveon collecting has been a little dry as of late. This is a bottle opener featuring a cute little Sylveon on top! There were 12 designs in all. The others featured on the back of the packaging. It's such a cool item!

A lovely new pink pen that was only sold at the Pokecen for a short time. They sold out fairly quickly and made one for the whole line.

They made all the Vees in their colors in pen form. Very cute. Love the gold trim.

Another fun food item for Sylveon! This time, it's on a yummy pocky like snack. The back showcases a "Find the differences" puzzle game. Sylveon is on it twice. 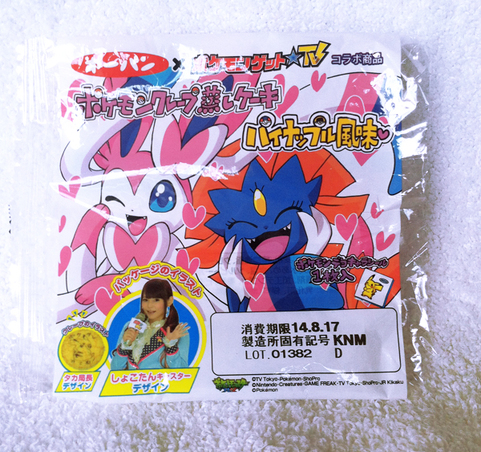 I just got a hold of these! These come with other Pokemon variants but these are all the Sylveon ones! They come in so many different colors! I have at least one of each of Sylveon design. I'm not sure if they come in every color though. I already have so many that it doesn't even matter if they're are more. :D 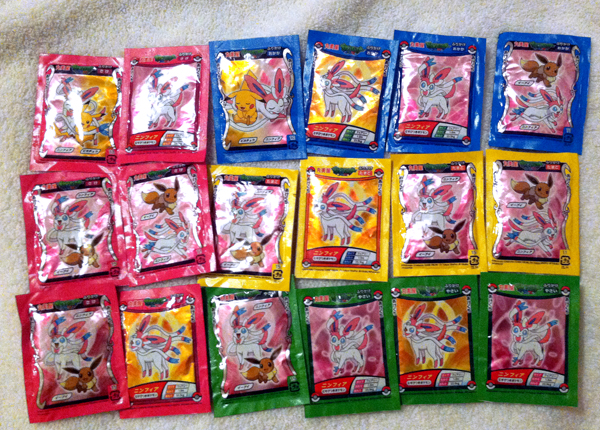 I'm not sure what type of treats are in this bag because I'll probably never open it. It features XY Pokemon on a train as well as a huge Yveltal on teh back.