Absol has the ability to foretell the coming of natural disasters. It lives in a harsh, rugged mountain environment. This Pokémon very rarely ventures down from the mountains. It sharply senses even subtle changes in the sky and the land to predict natural disasters. It is a long-lived Pokémon that has a life-span of 100 years.

(Picture needs to be updated.)
Oh, how I love lopsided unique pokemon. Absols devil spike ear just punctured a hole in my heart. Her whole design is just so awesome. Diaster pokemon? I say yes. I usually have one main favorite from each generation and during the time of Ruby and Saphire's release Absol got that spot for the third gen. I had no idea I would have so many favorites from the third gen as its not even my favorite region. lol I don't get how that works lol She's very dear to me as she's one of my main Pokemon on my team.

Fast forward to XY and the introduction of Mega Evolution....we get MEGA ABSOL!!!!!!!! When she was revealed I couldn't believe it! FINALLY something for Absol! Ah! Her Mega is beautiful and I couldn't be more happy with her. Everyone keeps saying she grew wings but its actually her tufts around her neck that grew out. So I'm guessing she can't fly.The spark I had for her when I first saw her in R/S/E has re-egnighted when they showed her Mega in CoroCoro. I'm excited to collect all the mega merch for her.

Anyway, Absol has some really unique merch but being another popular pup she'll be a tough one to complete. I plan to get as much as I can for her in due time but I don't mind waiting for her items to come gradually aswell. Whatever, I do get in the future will be a treat!

Here's the big one. This one is bulkier looking compared to the other movie plush. His eyes are embroidered. The way I tell these guys a part besides the size is the claws. This one has darker bigger claws compared to the smaller version. You can see the age in coloring on his head compared to his body. It's such a beauty though. 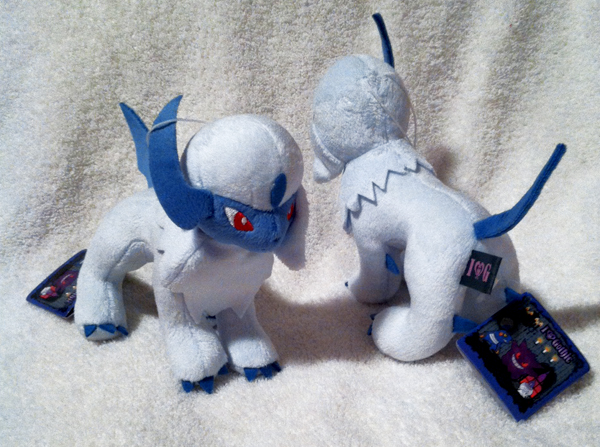 AH! Absol! You haven't had an official plush in SO long! I'm so happy for you! This is from the "I <3 Gothic" promotion. I was so surprised to see her in the line up! The plush is well made, the fur around her neck is cute and her material is really soft just like the I <3 Pikachu promo. The tush tag is so cool and the Pokemon she was teamed up with are amazing. It's small but not too small or too big. Just right.

Ah! I was so thrilled to know Absol would be getting a Petit plush! It's becoming one of my favorite Pokecen lines. Just look at that big head and little legs! The plush is so cute and detailed for being so small. The tag art is my favorite though. So adorable. 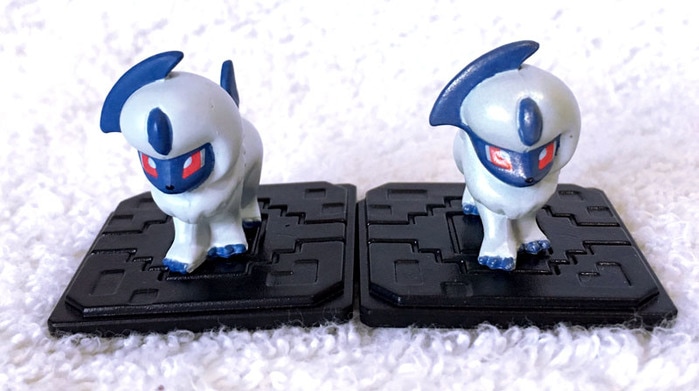 I'd never imagined to see Absol merch for Sun and Moon. Absol got one of these Moncolle figures AND a shiny pearly variant. These are extremely tiny but all the details are still really great! Theres a little scan code on the bottom.

I found this in a lot for a very good deal. It's in a sorta attack stance. It showcases a blue pokeball on it's keychain.

A cute little Pokemon center display that comes with a teeny tiny Absol. The plastic doors open and close when you pull the red tab. It also has a cute PC sign. This Absol is different as he has a little metal ball underneath him that magnetizes on the base.

I never would of thought I'd ever possess this item but the community is sneaky like that. I love when items that you think are unobtainable come to you out of thin air. This is one of them. Just look at this 'sol! Its such a unique pose! Her tail is between her legs and shes looking like shes ready to pounce. Love this figure for the awesome pose! She also comes in a cool sealed ball, symbolizing her razor wind attack. Way cool. :D 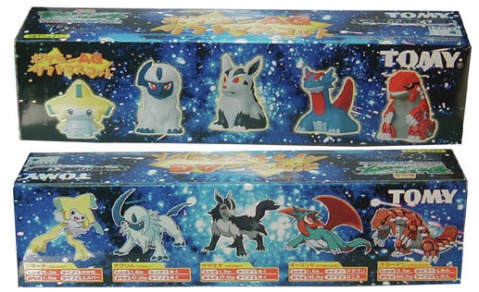 I saw this in someones very impressive Absol collection and this one just caught my attention, I had to get this girl in mine! I heard it was from a very rare Bathsalt set. Whoa, bathsalt lol thats pretty unique in itself. So I figured I'd probably wouldnt come across it for a very long time BUT I've said that far too many times and shouldnt be surprised when I see rare items I want these days lol because a few days later someone was auctioning it.  And again, I got lucky and got it for the starting bid. I did not expect it to be so tiny but I should be accustomed to this by now as well XD Its a great figure and I love it to death. One of my favorites due to its chibiness and pose.

Yay! Got this little guy finally. Sorta on the rare side but super tiny! I know theres a gold and silver variant out there.

A cute translucent tape dispenser. It's jammed packed with Pokemon on every inch of it! Including a Mega Absol on the spine.

I accidentally stumbled across these while visiting lil Tokyo. I thought I'd see what Pokemon I'd get and this little Absol decided to show herself. It's a pretty detailed cracker. XD I don't know how they can fit an image so small.

This is a game piece and playing board for the Pokemon Factory Othello Battle Game. It's a pretty pricey game so I was avoiding getting the set for awhile but finally caved. Glad I did because the pogs are really really nice! I love my Absol one. It's double sided and features Absol in both blue and red. She's also featured on the game board itself!

These are cards used in an XY game board. The Mega Pokemon got the fancy treatment as their cards are see through plastic with sparkly holo backing. Both cards are gorgeous!