Lugia's wings pack devastating power - a light fluttering of its wings can blow apart regular houses. As a result, this Pokémon chooses to live out of sight deep under the sea. It has an incredible ability to calm raging storms giving it the title the guardian of the seas. It is rumored to have been seen on the night of a storm.
The beast of the sea! Lugia is my all time FAVORITE legendary and has been since Silver. I fell in love with his song in the second Pokemon movie and till this day still listen to it. Hes just so majestic and powerful yet has giant chicken fingers! I love how hes basically three types even though, one of them doesn't really count lol Psychic and flying yet not water even though hes the beast of the sea lol. Oh, well.

Again, Lugia is a really popular pokemon so I have to be pretty patient if I want to complete this collection. And when I say complete I mean, all the things I want to get. Iol I know legendaries have TONS of merch but thats the fun of it. I think Lugia has the most out of all my collections, so I'm going to enjoy the ride! 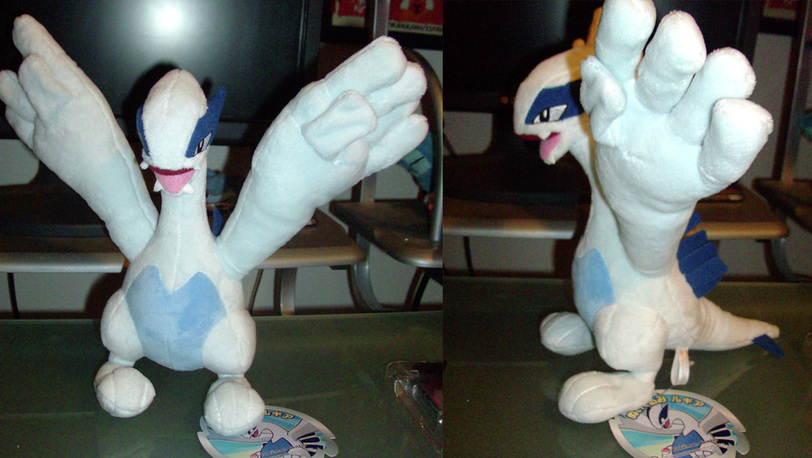 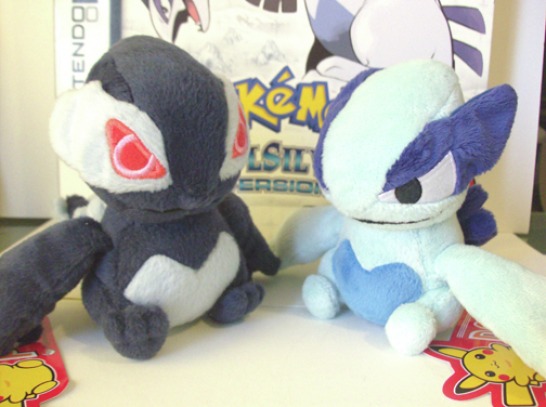 My lovelys! I loved Gale of Darkness just for the fact that it was a game focused on Lugia and an evil shadow Lugia form! I mean that is cool! I There's no Pokemon form like it! When I found out they made a Pokedoll of it he became one of my biggest grails! It took me a really long time to find one since he felt like a rare plush. After I finally found one online, I went to New York and saw a whoooole bin of them for cheap. >:O I don't care. The Dark Lugia is such a special pokedoll! I'm really glad he got a plush at all! The Lugia pokedoll I got recently after waiting and waiting and being patient enough to get it at the Nintendo Store release of SoulSilver. I'm glad I did because he was there and for $10 bux :D These are my favorite items from my Lugia collection. <3

Thank you new Power of us movie for all these new Lugia plush! This one was won as a prize in a crane game. His wings are nice and the face shape is slightly different than the past ones I've gotten. 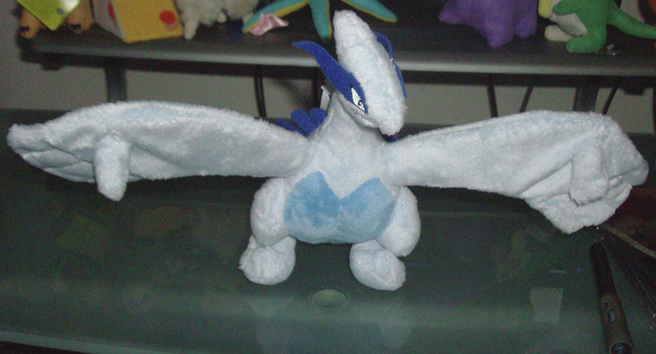 When this was first released, I just knew I had to have it. I know theres a ton of beautiful Lugia plush I haven't searched for yet but this one I knew I would hunt down. When it finally hit stores I was on vacation, I searched TRU in Florida only to find a Politoed. Then in NY, I was only welcomed by another Politoed and an Igglybuff. Third times the charm and this time, I was going to the biggest TRU in the world, the New York City. TRU. I HAD to find it there. But alas, there was only another Politoed to mock me. The same day I found one for sale online. When it finally came I was truly impressed by its craftsmanship. By the picture I thought it was going to be small and beanbag like but I was sooo wrong. This is so nicely made, the wing span on his is a lot bigger than I expected and his all out pattern is so well done. I can see why he was so sought after at toy stores. Hes the best plush from the set. I'm glad I could snag one before they become incredibly rare.

What a beauty! Look at those colors! They always get just the right shade for the shiny. The white is different than the official as well. The eye detail is astounding. He just pops. ~Made by Kikuryo626.​

Ah. I always wanted an official shadow Lugia figure to go with my pokedoll. Though, one was never made. This is just as good. The crisp off black is PERFECT as well as the pink detail in the eyes. Its absolutely gorgeous. SO happy with this custom paint job. ~ Made by Kikuryo626.

I've always wanted this figure but it just never wanted to pop up. I always saw it in other people's collections but never for sale. This is the aeroblast Lugia! It comes with both it's missles still attached! It's plastic has colored due to aging but mine is in otherwise excellent condition. The arms, legs, tail and neck are jointed! 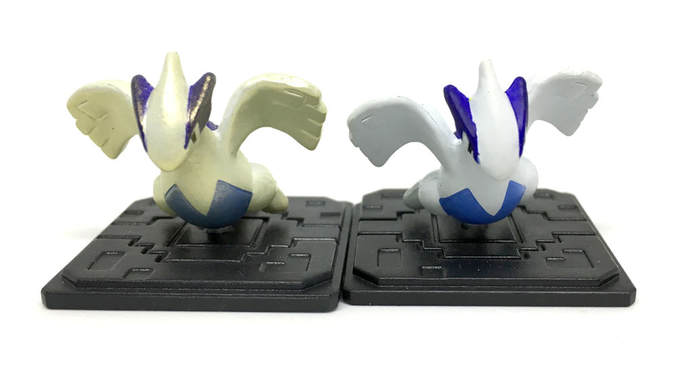 Got both these guys! Took forever to reunite them! Couldn't find the shiny pearl version for awhile.

I always wanted to collect some of these figures but all the poke I collect from the 1st and 2nd gen are rare or sought after. Though, I stumbled upon this for a very decent price and I'm glad I did. Hes so pretty in his gold bronze look and hes pretty heavy for his size. :D

Out of all the clear kids I could find for ANY of the pokemon I collect, I find both variants for the legendary. I'm shocked that I found this kid and for such a great price! Even though I don't have much Lugia merch as many collectors, its great to know I have some rare items such as both clear kids! Hes so pretty with his transparent body and bright blue features. The tail is awesome too curling up against his body. :> These kids give me hope, if I can find them I can find clears for all my other pokemon. 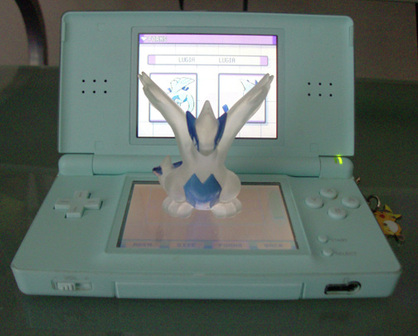 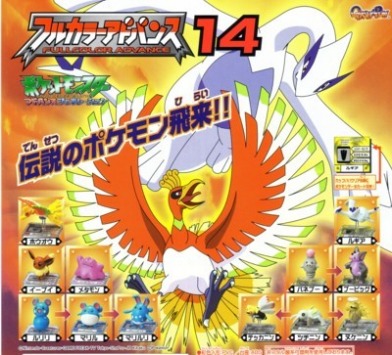 Settei are sheets of drawings of a character from the anime or movies. Settei are character layouts for animators to use as a reference in the production of the anime. They are copy sheets handed out only to animators and are only used in the studio.They are photocopies of an original drawing to be used by production staff and usually consist of different views, expressions, poses and intricate details of a character's design. The settei aren't just limited to characters- any kind of concept art can be found, including but not limited to characters, backgrounds, locations and items. This is the closest one can come to owning anything like a cel or cel sketch from Pokemon after the Jhoto region, as Pokemon Co. does not release sketches or hand drawn artwork and coloring is all digital (no cels).

Lugia, you've been extremely lucky this movie run. This product came in a set with two tops to battle and a plethora of disks to shoot. Lugia is displayed in one of the battle tops. It's a very nice pog and big too!

I had these back when I used to play the card game. I'd take them to all the tournaments when I played. :3 I love their silver shiny color and the image itself is so nostalgic. Oh, the good ol' pokemon days. 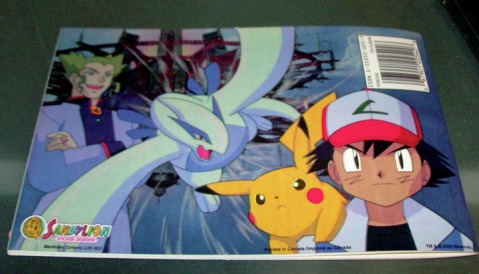 Another item I had while collecting during the release of the 2nd movie. Lugia was my obsession back then and I still love him. This is a sticker book I got around the time of the movie. I still saved the Lugia sticker that came inside but what I loved best was the back cover of the sticker book. Its just so epic compared to the group shot of the pikachu adventure.