It has a flotation sac that is like an inflatable collar. It floats on water with its head out.  It swims by rotating its two tails like a screw. When it dives, its flotation sac collapses.
フローゼル #419 Floatzel: The Sea Weasel Pokemon 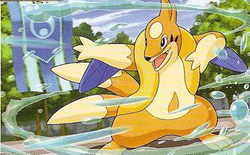 It floats using its well-developed flotation sac. It deflates the sac before it dives.  It assists in the rescues of drowning people.  It is a common sight around fishing ports.
(Picture needs to be updated.)
At first, I didn't really care for Buizel when he first appeared in the Manaphy movie. He was a very hyped pokemon and I usually love the ones that are less appreciated. Platinum finally came out and I ended up catching a Buizel for my team. It evolved into Floatzel and he kicked major ass. I ended up finishing the game with him and fell in love with him. Buizel even pulled my heart strings and now I love them both. I only want to collect a few more items of these guys and then I think my collection is complete.

This zukan is special since it can link up to Manaphy and the Mantine line. It looks really pretty and I may consider getting those in the future just so I can link them up to my Zel' line. My zukan came with a really long peg, so Im thinking its for the other two that connect so I'll save it if I ever do try to get the others.

I finally got the last water weasel clear kid I needed to complete my set! This is the swimming clear kid! :D It took forever to find but having it at last is really amazing. Love my water weasels.

I never thought I'd find this. I'm that much closer to owning all the clear weasel kids. <3 This one was in excellent condition and came to me at a good price. It's really pretty with the translucent orange. Floatzel has only one clear kid so it's great to own it.

I bought so many blind bags and got tons of deplicates of everyone but my weasel. Then lucky for me, Gin had an extra to trade! So cute!

It's nice to finally get something new for this collection. This is an item I've been wanting for so long but it was only available in a movie set of these bloks and I just found out that he got two variants. A mad and a happy. So now I gotta find the other.

Yay! He got a clearfile with the cute green pattern on the back! :D