SO. If you guys remember years ago, Gin won a huge lot of Metal kids, most being gen 3 Pokemon. I told her lemme know if you find any sloths and dang it! She actually did! I never SEEN or knew these Slakoth metal figures existed. All my years of collecting I've never found any info that he existed. Why is it that every time I kid with Gin she finds the item or it magically exists? XD
She had a live stream where she unboxed them all and I only caught the end of it. I figured she didn't find anything sloth or shroom related but I kept getting comments with smiley faces and excited emoticons. So I went to the thread and out of no where Gin shows me this epic piece of metal....I couldn't believe it. SLAKOTH HAS A METAL FIGURE aaaaaah! I'm sad I didn't know about his existence sooner but I'm also happy I have something so elusive to collect now. *o* He's so well sculpted, it even has his tufts of hair! He's actually pretty heavy too. He's one of my new favorites for my sloth collection. Just one more to go! C'mon gun metal! Show yourself!

Seriously, Vigoroth gets cool figures. I love Vigoroth when his mouth is open and you can see his cute little teeth. This one has cool slashing action! The detail on his cheek and chest fur is cute and again, I love his paw pads. This is the only figure of Vigoroth where hes sporting black claws! You could either get him with Pikachu since Ash fought Norman's in the show, or get him in the 10th anniversary pack with Slaking. 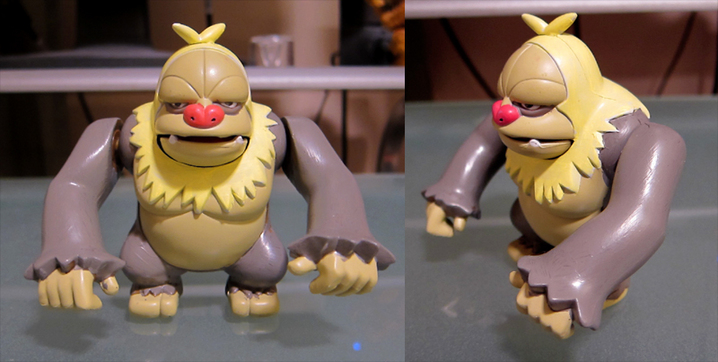 I've decided to get 2 hasbro Slaking figures!!! And paint one shiny! Oh and how glorious he is in his sleek silver coat! The paint slid on him so smoothly, I couldn't be happier with the paint job. He's the biggest Slaking figure out there so getting two was a must. Plus it makes my collection look 10x bigger. :X Here he is with my normal Slaking figure. Seeing them together makes me so happy!!! And really makes the shiny stand out. His shiny variant is very faded but noticeable. So classy. 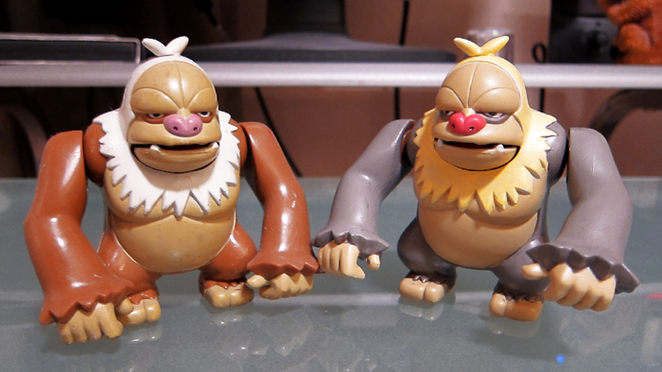 Yay! These are some of my favorite figures! Too bad they suffer from "Same Pose" syndrome. I love Slakoths little bum and smile on this figure. Vigoroth looks more like the anime version of him while the zukan looks more like the art. Very interesting and I always high five his claw with my index finger. Super awesome figures, I'm so happy the sloths got some!

This was so tiny to paint. I bought this guy thinking I'd never find another with a base, only to find a complete set they were included in. So I had one with the stand and this one which I knew from the start I'd paint. I didn't realize till just now that I took these pictures before I painted his back paws pink. Oopsie. I loooove seeing this little guy stand out in my collection. The purple shade is much more vibrant in person but the camera ated it. :<

Aaaaagh! Kids! The attack yawning kid is my favorite Slakoth figure. I was so excited to know he got an attack kid. Seeing his mouth open and his litte fangs is the best! So adorable and its funny how the Slakoth Kids are bigger than the Slaking lol. 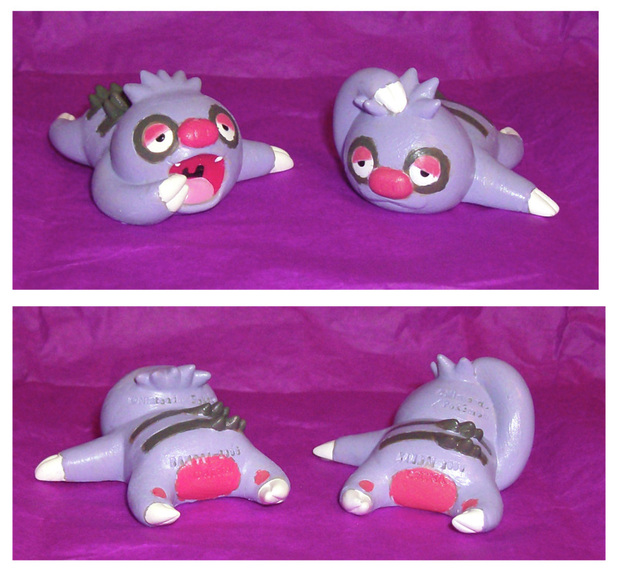 I knew from the start I wanted to collect every sloth kid and paint them shiny. I had to have two of each kid and eventually accumulated them. Out of all the shiny kids I painted these guys came out the best! They are just so pretty in the sea of browns and white the normal sloths possess. I LOVE shiny Slakoth. If you haven't noticed, my favorite color is purple, he's so special considering he turns yellow when he evolves. How odd. 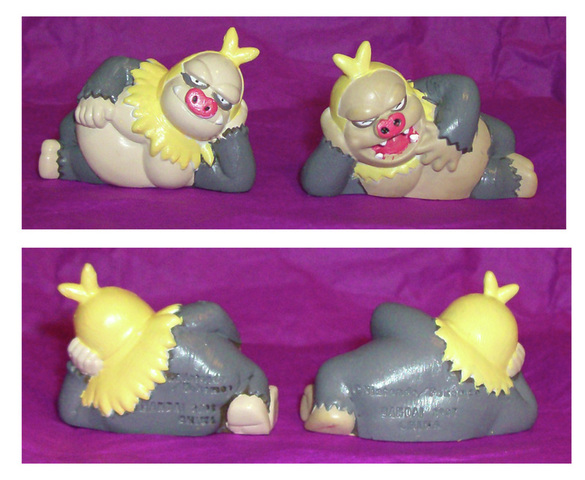 These were probably the easiest to paint. The only hard part being to paint the dark pink inside the attack kids mouth.  I love his shiny colors! Pretty faded but still noticeable.  I actually only had one normal Slaking kid, so I need to get my hands on another. I was too excited to paint that I forgot. They just recently made a new attack Slaking so be prepared to see another painted Slaking in the future! 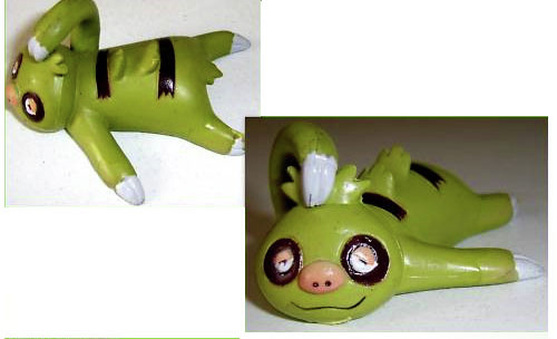 This figure has such a funny story, back in 2007 I went to SD comic con, this booth was selling ALOT of "official Tomys' cough cough...*BOOTLEGS* cough cough. They had hundreds but the one I had my eye for was this particular Slakoth I asked if these were real but I knew they weren't and they kept defending themselves saying they were. I decided that this figure had to be mine but then they told me this bootleg was $10 bux 0-0 I did not want to spend THAT much on a bootleg. After that, I was seriously collecting the sloths and went looking for the same figure for a decent price, only to never find it again. I regretted for years that I didn't get that figure back at that comic con booth. ;3;  Then a awesome Sloth appreciator went up and put this guy up for sale!!! Even for being a bootleg this figure is SO amazing! Its bigger than any Slakoth figure I own.  He's very detailed too, with his back spikes, smile and curled arm scratching his little head. X3 I'm so pleased to finally have this cutie. I now have every Slakoth bootleg out there, I might consider getting all the last Vigoroth and Slaking booties out there. 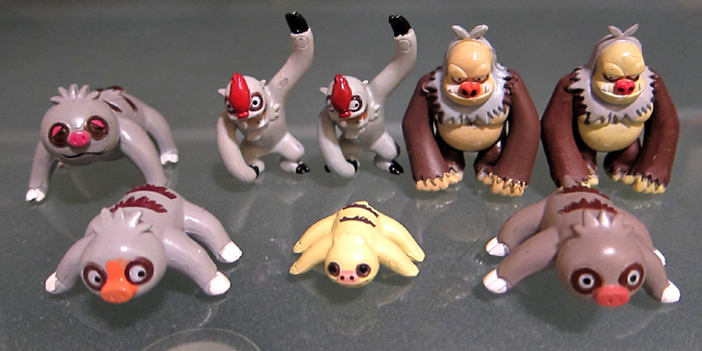 Booty-licious Bootlegs! Hohoho, these make me laugh but due to lack of figures I had to get some to make my collection feel bigger. ;-;Even though I got some doubles, they are ALL different! Just look at their shifting eyes. Their all over the place.